This systematic review summarizes evidence on the effectiveness of strategies to increase men’s HIV-testing in sub-Saharan Africa.

Medline, EmBase, Africa-Wide Information and Global Health were searched. Cluster and individually randomized trials evaluating interventions to increase the proportion of adults (≥15 years) testing for HIV were eligible if they were conducted in sub-Saharan Africa, included men in the study population, and reported HIV-testing data by sex. References were independently screened.

Of the 1852 references, 15 papers including 16 trials were eligible. Trials were judged too heterogeneous to combine in meta-analysis. Three interventions invited men to attend antenatal care-based HIV-testing via pregnant partners, of which two showed a significant effect on partner-testing. One intervention invited men to HIV-test through pregnant partners and showed an increase in HIV-testing when it was offered in bars compared with health facilities. A trial of notification to partners of newly diagnosed HIV-positive patients showed an increase in testing where notification was by healthcare providers compared with notification by the patient. Three interventions reached men already at health facilities and eight reported the effects of community-based HIV-testing. Mobile-testing had a significant effect on HIV-testing compared with standard voluntary counselling and testing. Home-based testing also had a significant effect, but reached smaller numbers of men than mobile-testing. 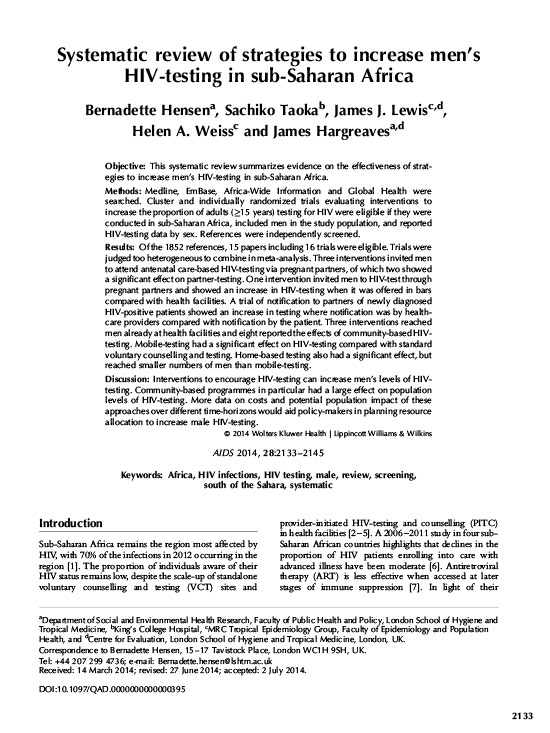