Why have African men been largely overlooked in HIV policy and programs, while poor women are almost always targeted? Men are more likely to die of AIDS than women, and multiple studies in Africa find that wealthier men are more likely to be infected with HIV than are poor men. We draw on survey and ethnographic data from rural Malawi, a country in southeastern Africa that has experienced a major AIDS epidemic, to examine this puzzle of the “missing men.” Using longitudinal survey data collected at the height of Malawi’s epidemic, we find that not only are wealthy urban men more likely to be HIV positive, but so too are rural men who are wealthy by rural standards. We further advance our argument using ethnographic data to show that rural Malawians understand that men with money are a risk, both to themselves and others. We then systematically analyze HIV policies and documents from the World Health Organization (WHO), UNAIDS, and the President’s Emergency Program for AIDS Relief (PEPFAR)—large international organizations at the forefront of responding to AIDS—to identify the extent to which women and men and poverty and wealth appear as targets. We present evidence showing that women, who appear in these documents more than twice than do men, are framed as unquestionably vulnerable and in need of aid, whereas men are overlooked. We argue that the international discourse on AIDS in Africa cannot be conceived of as separate from the broader discourses of economic development. The campaigns by international donors and NGOs to protect poor women while sidelining men with money gives an incomplete picture of AIDS epidemics. 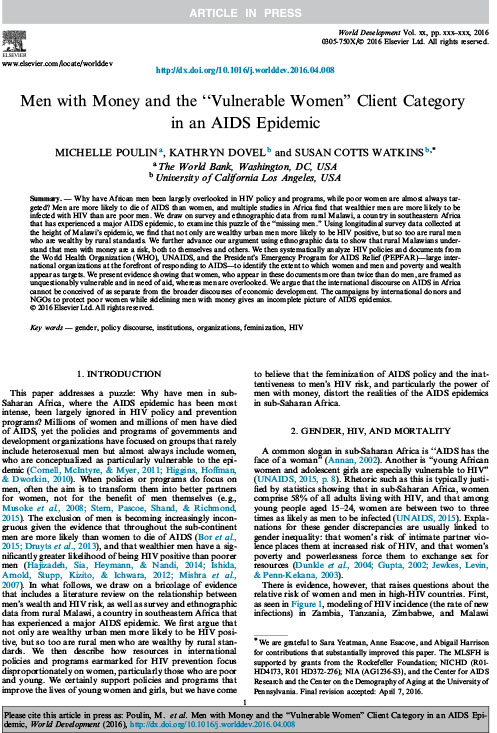