Men, Prostitution and the Provider Role: Understanding the Intersections of Economic Exchange, Sex, Crime and Violence in South Africa

South African policy makers are reviewing legislation of prostitution, concerned that criminalisation hampers HIV prevention. They seek to understand the relationship between transactional sex, prostitution, and the nature of the involved men.

1645 randomly-selected adult South African men participated in a household study, disclosing whether they had sex with a woman in prostitution or had had a provider relationship (or sex), participation in crime and violence and completing psychological measures. These became outcomes in multivariable regression models, where the former were exposure variables.

51% of men had had a provider relationship and expected sex in return, 3% had had sex with a woman in prostitution, 15% men had done both of these and 31% neither. Provider role men, and those who had just had sex with a woman in prostitution, were socially conservative and quite violent. Yet the men who had done both (75% of those having sex with a woman in prostitution) were significantly more misogynist, highly scoring on dimensions of psychopathy, more sexually and physically violent to women, and extensively engaged in crime. They had often bullied at school, suggesting that this instrumental, self-seeking masculinity was manifest in childhood. The men who had not engaged in sex for economic exchange expressed a much less violent, more law abiding and gender equitable masculinity; challenging assumptions about the inevitability of intersections of age, poverty, crime and misogyny.

Provider role relationships (or sex) are normative for low income men, but not having sex with a woman in prostitution. Men who do the latter operate extensively outside the law and their violence poses a substantial threat to women. Those drafting legislation and policy on the sex industry in South Africa need to distinguish between these two groups to avoid criminalising the normal, and consider measures to protect women. 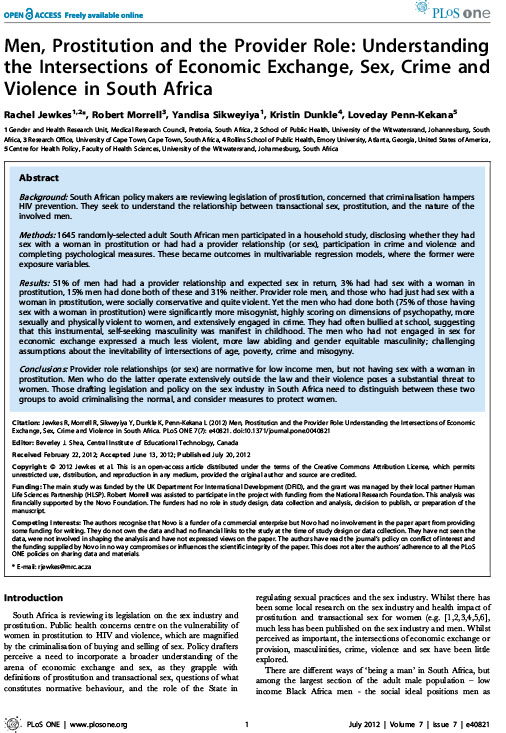