Women have better patient outcomes in HIV care and treatment than men in sub-Saharan Africa. We assessed—at the population level—whether and to what extent mass HIV treatment is associated with changes in sex disparities in adult life expectancy, a summary metric of survival capturing mortality across the full cascade of HIV care. We also determined sex-specific trends in HIV mortality and the distribution of HIV-related deaths in men and women prior to and at each stage of the clinical cascade.

Data were collected on all deaths occurring from 2001 to 2011 in a large population-based surveillance cohort (52,964 women and 45,688 men, ages 15 y and older) in rural KwaZulu-Natal, South Africa. Cause of death was ascertained by verbal autopsy (93% response rate). Demographic data were linked at the individual level to clinical records from the public sector HIV treatment and care program that serves the region. Annual rates of HIV-related mortality were assessed for men and women separately, and female-to-male rate ratios were estimated in exponential hazard models. Sex-specific trends in adult life expectancy and HIV-cause-deleted adult life expectancy were calculated. The proportions of HIV deaths that accrued to men and women at different stages in the HIV cascade of care were estimated annually.

Mass HIV treatment has been accompanied by faster declines in HIV mortality among women than men and a growing female–male disparity in adult life expectancy at the population level. In 2011, over half of male HIV deaths occurred in men who had never sought clinical HIV care. Interventions to increase HIV testing and linkage to care among men are urgently needed. 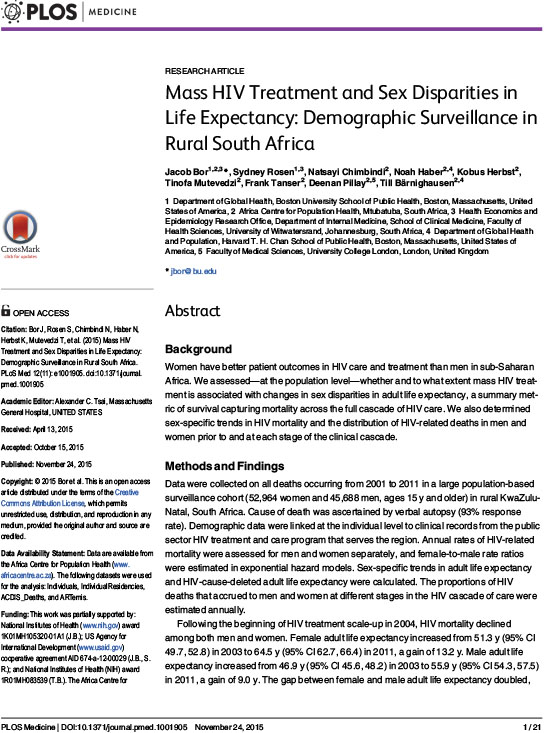