To describe the prevalence and patterns of rape perpetration in a randomly selected sample of men from the general adult population, to explore factors associated with rape and to describe how men explained their acts of rape.

In all 27.6% (466/1686) of men had raped a woman, whether an intimate partner, stranger or acquaintance, and whether perpetrated alone or with accomplices, and 4.7% had raped in the last 12 months. First rapes for 75% were perpetrated before age 20, and 53.9% (251) of those raping, did so on multiple occasions. The logistic regression model showed that having raped was associated with greater adversity in childhood, having been raped by a man and higher maternal education. It was associated with less equitable views on gender relations, having had more partners, and many more gender inequitable practices including transactional sex and physical partner violence. Also drug use, gang membership and a higher score on the dimensions of psychopathic personality, namely blame externalisation and Machiavellian egocentricity. Asked about why they did it, the most common motivations stemmed from ideas of sexual entitlement.

Perpetration of rape is so prevalent that population-based measures of prevention are essential to complement criminal justice system responses. Our findings show the importance of measures to build gender equity and change dominant ideas of masculinity and gender relations as part of rape prevention. Reducing men’s exposure to trauma in childhood is also critically important. 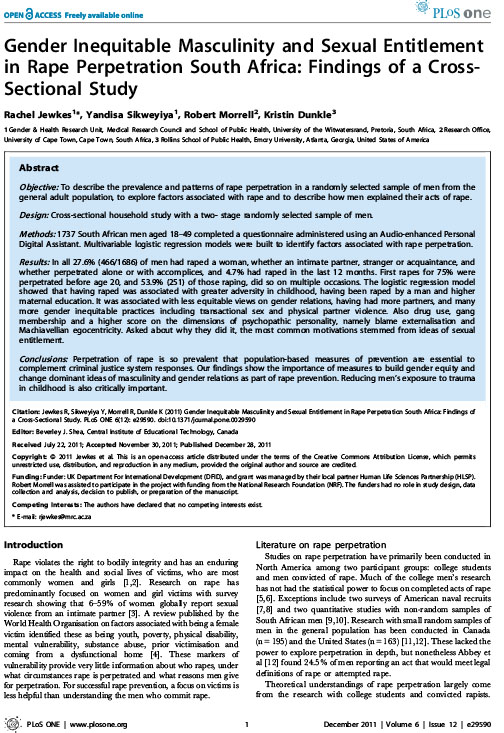