Abstract
Introduction: It would be useful to understand which populations are not reached by home-based HIV-1 testing and counselling (HTC) to improve strategies aimed at linking these individuals to care and reducing rates of onward HIV transmission.
Methods: We present the results of a baseline home-based HTC (HBHTC) campaign aimed at counselling and testing residents aged 16 to 64 for HIV in the north-eastern sector of Mochudi, a community in Botswana with about 44,000 inhabitants. Collected data were compared with population references for Botswana, the United Nations (UN) estimates based on the National Census data and the Botswana AIDS Impact Survey IV (BAIS-IV). Analyzed data and references were stratified by age and gender.
Results: A total of 6238 age-eligible residents were tested for HIV-1; 1247 (20.0%; 95% CI 19.0 to 21.0%) were found to be HIV positive (23.7% of women vs. 13.4% of men). HIV-1 prevalence peaked at 44% in 35- to 39-year-old women and 32% in 40- to 44-year-old men. A lower HIV prevalence rate, 10.9% (95% CI 9.5 to 12.5%), was found among individuals tested for the first time. A significant gender gap was evident in all analyzed subsets. The existing HIV transmission network was analyzed by combining phylogenetic mapping and household structure. Between 62.4 and 71.8% of all HIV-positive individuals had detectable virus. When compared with the UN and BAIS-IV estimates, the proportion of men missed by the testing campaign (48.5%; 95% CI 47.0 to 50.0%) was significantly higher than the proportion of missed women (14.2%; 95% CI 13.2 to 15.3%; pB0.0001). The estimated proportion of missed men peaked at about 60% in the age group 30 to 39 years old. The proportions of missed women were substantially smaller, at approximately 28% within the age groups 30 to 34 and 45 to 49 years old.
Conclusions: The HBHTC campaign seems to be an efficient tool for reaching individuals who have never been tested previously in southern African communities. However, about half of men from 16 to 64 years old were not reached by the HBHTC, including about 60% of men between 30 and 40 years old. Alternative HTC strategies should be developed to bring these men to care, which will contribute to reduction of HIV incidence in communities. 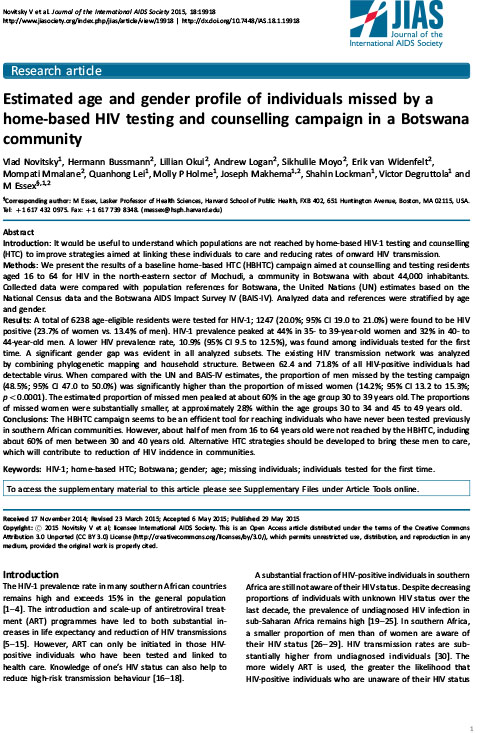