Although otorrhea occurs commonly in HIV-infected infants, there are few data. We compared the incidence of otorrhea in infants receiving early vs deferred ART in the C hildren with H IV E arly Antir etroviral (CHER) trial. Infants aged 6 to 12 weeks of age with confirmed HIV infection and a CD4 percentage greater than or equal to 25% were randomized to early or deferred ART at two sites in South Africa. Medical records from one study site were reviewed for otorrhea.

Data were reviewed from the start of the trial in July 2005 until 20 June 2007, when the Data Safety Monitoring Board recommended that randomization to the deferred arm should stop and that all infants in this arm be reviewed for commencing antiretroviral therapy. Infants entered the study at a median of 7.4 weeks of age. Eleven of 38 (29%) on deferred therapy and 7 of 75 (9%) in the early-therapy group developed otorrhea (risk ratio 3.1, 95% confidence interval (CI) 1.31-7.36; p = 0.01).

Early initiation of antiretroviral therapy is associated with significantly less otorrhea than when a deferred strategy is followed. 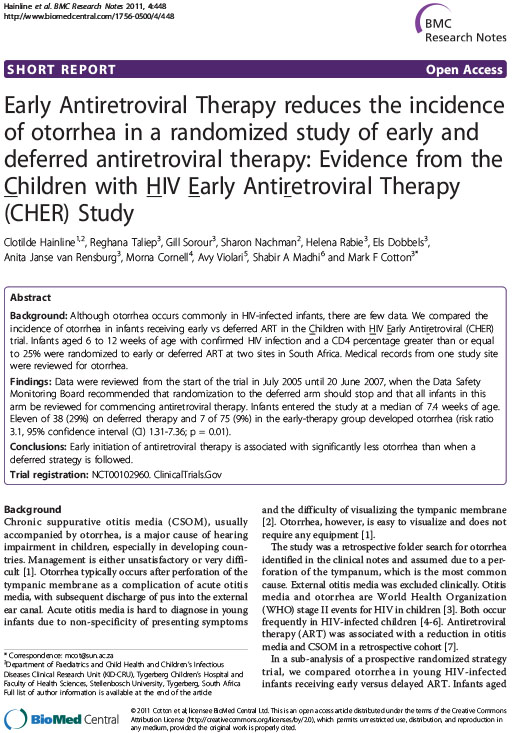