Objective. To describe and evaluate the outcomes of a support programme for patients with virological failure while receiving second-line antiretroviral therapy (ART) in South Africa.
Method. We described a comprehensive medical and counselling patient support programme for patients receiving secondline ART and with two consecutive viral loads (VLs) >1 000 copies/ml. Patients with >3 months follow-up and at least one VL measurement after inclusion in the programme were eligible for analysis.
Results. Of 69 patients enrolled in the programme, 40 had at least one follow-up VL and no known drug resistance at enrolment; 27 (68%) of these re-suppressed while remaining on second-line ART following enhanced adherence support. The majority (18/27; 67%) achieved re-suppression within the first 3 months in the programme. Five patients with diagnosed second-line drug resistance achieved viral re-suppression (<400 copies/ml) after being switched to third-line ART. Seven patients (7/40; 18%) did not achieve viral re-suppression after 9 months in the programme: 6 with known adherence problems (4 without drug resistance on genotype) and 1 with a VL <1 000 copies/ml. Overall, 3 patients (4%) died, 3 (4%) were lost to follow-up and 2 (3%) were transferred out.
Conclusion. Our experience from a routine programme demonstrates that with targeted adherence support, the majority of patients who were viraemic while receiving second-line ART returned to an undetectable VL within 3 months. By increasing the time receiving second-line ART and decreasing the need for genotypes and/or third-line ART, this intervention may reduce costs. 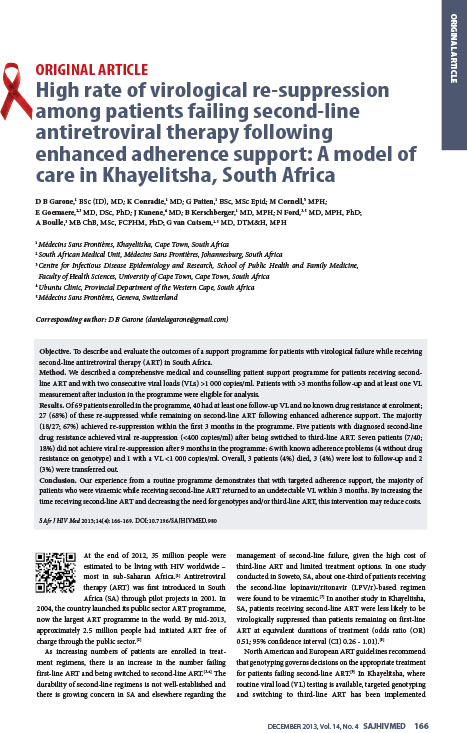