Completeness of death recording was estimated using a capture–recapture approach. Six ART programmes linked their patient record systems to the vital registration system using civil identity document (ID) numbers and provided data comparing the outcomes recorded in patient files and in the vital registration. Patients were excluded if they had missing/invalid IDs or had transferred to other ART programmes.

After exclusions, 91,548 patient records were included. Of deaths recorded in patients files after 2003, 94.0% (95% CI: 93.3–94.6%) were recorded by civil registration, with completeness being significantly higher in urban areas, older adults and females. Of deaths recorded by civil registration after 2003, only 35.0% (95% CI: 34.2–35.8%) were recorded in patient files, with this proportion dropping from 60% in 2004–2005 to 30% in 2010 and subsequent years. Recording of deaths in patient files was significantly higher in children and in locations within 50 km of the health centre. When the information from the two systems was combined, an estimated 96.2% of all deaths were recorded (93.5% in children and 96.2% in adults).

South Africa’s civil registration system has achieved a high level of completeness in the recording of mortality. However, the fraction of deaths recorded by health centres is low and information from patient records is insufficient by itself to evaluate levels and predictors of ART patient mortality. Previously documented improvements in ART mortality over time may be biased if based only on data from patient records. 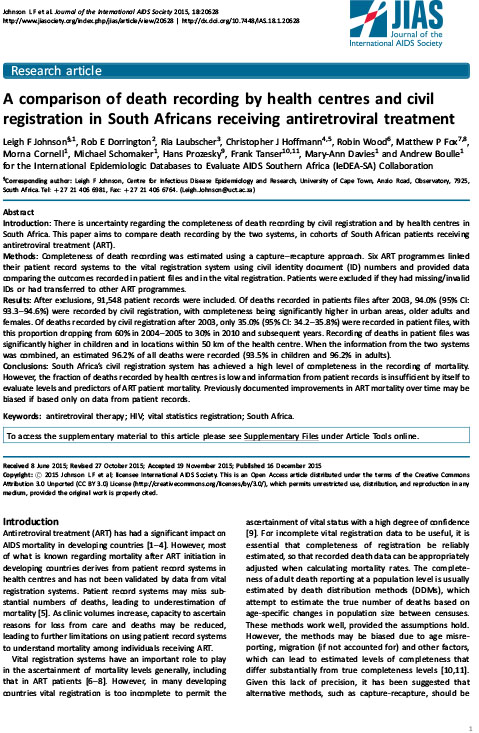